The mere mention of the word spring conjures up visions of strengthening sunlight reflecting a multitude of shades of green; woods and hedgerows loud with birdsong and wildflowers in abundance and, everywhere you look, new life.

A queen bumblebee, an aerodynamic anomaly, wings seemingly too small to support the bulk of her furry body, trundles about seeking a safe place beneath a shed, or pile of logs, or disused wood mouse burrow to begin the process of founding a new female-dominated dynasty of worker bee pollinators – to the benefit of a host of food crops. Not so welcome, but of equal worth to gardeners and farmers, is the queen wasp. She too is searching out a site to establish her caterpillar and aphid-consuming colony. 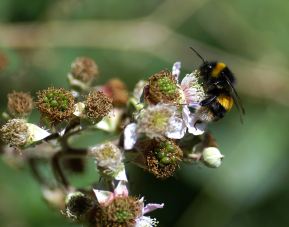 The new decade opened with a worldwide pandemic, but nature is carrying on as usual. The Duke of Burgundy fritillary butterfly, a small chequered-winged insect, favours cowslips for its larval food plant; we may look forward to a vintage butterfly year. The ‘Duke’ has some special companions in spring, the orange tip butterfly which patrols stands of garlic mustard plants and the green hairstreak butterfly that loves to sunbathe on bramble.

The month of April and May mark the highest level of migrant bird movements.  Most winter migrants like waders, ducks and wild swans will have left Britain’s lakes, ponds, estuaries and mudflats well fed in preparation for the long journey back to their summer breeding grounds, many in the far north.  From the opposite direction a flood of summer migrant songbirds is arriving, in particular the warblers.   Among them, though not known for their musical ability, will be some special rare visitors like the large fish-eating osprey and elegant common crane.  Both osprey and crane indicate the success of policies explored over many years of providing habitat and round the clock protection.  Neither as large nor as spectacular as the osprey, nor as showy as the cranes, nor as musical as the warblers, is the corncrake. This highly specialised member of the rail family very nearly became extinct in Britain due mainly to long term changes in farming practice; it’s a bird that needs flower-rich hay meadows and tall rank grasses cut much later in the year than the current trend for haylage or silage and, consequently, the secretive ratchet call of the territorial male has become a rare sound in the countryside.  Despite its seemingly weak fluttery flight the corncrake is a long-distance migrant, flying up from Africa in the spring to breed.  Once common on the flowery water meadows and traditional hayfields found in Victorian and Edwardian times, towards the end of the last century they had retreated to a small area of wildflower-rich ‘Machair’ hay meadows on the northern isles of Scotland and to a few hay fields in Ireland.

Thanks to a remarkably far-sighted project sponsored among others by Whipsnade Zoo, the RSPB and the Pensthorpe Trust in Norfolk, the corncrake should be heard (once we are allowed out and about again) on the newly recreated Cambridgeshire Great Fen project, which aims to restore over 3,000 hectares of fenland habitat between Huntingdon and Peterborough.  The plan is to connect the two National Nature Reserves of Wood Walton Fen and Holme Fen and thus create an area with real conservation benefits for wildlife – and socio-economic benefits for people too.

Wood Walton Fen is an internationally important site and one of the very first designated nature reserves in Britain because of the communities of wetland plants and animals that it supports; this is reflected in its designation as a Ramsar site and Special Area of Conservation.  The whole project is impressive in its ambition and vision, aiming to combine nature conservation and management with tourism and other income-generating activities. It could also play a strategic role by storing flood water for the protection of the Middle Level System and the homes, farms and businesses that depend on this system.

However exciting they may be rarities are but the icing on the cake. It is the commonplace breeding birds like bluetits, sparrows, dunnocks and greenfinches, collared doves, robins and blackbirds that share our gardens and town parks that are the reality of the countryside and excite millions of garden birders, especially in otherwise ecologically barren areas of high density housing.  Regular feeding with nuts, seeds, fat and crumbs has meant that garden birds are filling nest boxes with clutches of eggs that will hatch to replace the birds lost to the rain-sodden winter…

Puffins on Skomer Island  and Goldfinch at Dunstable Downs

If one particular birdcall heralds the spring, it must be the bi-syllabic chiff-chaff which repeats its name from hazel twigs in ancient woodland and manicured hedges in town parks.  These birds make a journey of thousands of miles to come to Britain, and as the dawn chorus ripens so the chiff-chaff’s two notes will be joined by the more varied songs of other summer migrants with a backing of staccato drumming provided by resident greater-spotted woodpeckers and green woodpeckers; they use their head and beak as a hammer to beat on a resonant dead tree to attract a mate. To avoid getting a headache the woodpecker’s brain and eyes are protected from impact and flying chips of wood by a cushion of fluid at the base of the bill and around the eye socket.

Wherever you live in these complex islands of ours, the birdsong is varied.  In Kent, nightingales, fresh from Africa, join in with British robins. In Wales, summer migrant redstarts compete with song thrushes… and, of course there is always the blackbird. Few songsters can hold a candle to this Pavarotti of the avian world; its melody says … this is my place in the British countryside.

Robin in the Garden and Corncrake at Pensthorpe, Norfolk

Great Fen Project  –  Still in its early stages this is destined to become one of the most exciting fenlands re-creation projects in Europe www.greatfen.org.uk

RSPB (Royal Society for the Protection of Birds  –  As regular readers will note the RSPB crops up regularly in recommended website; with good reason. It’s role in national and international bird and habitat conservation is unmatched. www.rspb.org.uk

Buglife  –  An organisation dedicated to conserving the small things that run the world  www.buglife.org.uk

The Status of Birds in Britain and Ireland by David T. Parkin & Alan G. Knox Published by Christopher Helm (Imprint of A C Black) ~ ISBN 978-1-4081-2500-7 – A new publication packed with information on every conceivable British bird.

Insects of Britain and Western Europe by Michael Chinery Published by Collins ~ ISBN No: 0-00-219137-7 – The insect reference book I use the most.