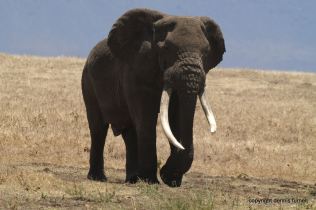 One of the joys of my work is the opportunity for travel. My wife is not particularly keen on rough and ready camping, she prefers a little comfort, and I can’t argue with that so when I travel to Africa I usually go with my our Robin.

When I was a small child, living in a tiny hamlet in north Devon, my favourite reading was a pre World War 11 Encyclopaedia Britannica, which I scoured from end to end looking for things about wildlife. Of all the places that caught my attention the Serengeti and the Ngorongoro crater came top of the list. The pictures showed men in safari suits proudly holding a massive rifle beside the dead carcass of some unfortunate creature. It put me off big game hunting, but instilled instead a fervent desire to visit these magical places that seemed only slightly less distant than the far side of the moon.

Life can play amusing tricks and having visited Africa as part of my work as a wildlife broadcaster and writer I developed an abiding affection for the continent, including the beautiful but troubled country of Sierra Leone; but, despite travelling to various African countries I had never been to East Africa until five years ago. A trip to the World Travel market in London to make a programme for local radio about foreign wild life travel, took me to the section on African travel where I met Carel Verhoef, a brilliant naturalist a South African who organises and conducts safaris. It was the beginning of a fascinating long distance friendship, which resulted in us arranging a trip using simple ridge tents, camp beds, a Land Rover and a plan that took us from camp to camp across the Serengeti and the Ngorongoro Crater finishing up at a place called Lobo Kope a massive outcrop of rock a billion years old.

Carel and Robin, about the same age, have a highly developed sense of humour and get on well and both of them look on me as if I’m in my dotage – and they may well be right. We timed our trip to catch part of the mass migration of wildebeest and zebra across the Mara River with the crocodiles, true prehistoric monsters, waiting their opportunity to make short work of the weak and immature… But funnily enough, it was the elephants I liked best. I had never seen truly wild plains elephants before, only glimpsing forest elephants in Sierra Leone.  Like most people my view of elephants had been restricted to the zoo. I live not far from the RZS collect at Whipsnade, perhaps one of the  best collections of its kind, but captive elephants have little opportunity to exhibit the majesty of their wild brethren and after two immense four ton bull elephants walked silently through our camp site as if we did not exist, my perception of them changed completely.

Carel negotiated the typically African roads that led to the place I had so wanted to see since childhood – the world heritage site of the Ngorongoro Crater, a collapsed volcano three million years old, twenty six kilometers long and twenty one kilometers wide. We stopped at a viewpoint high above the crater and I tried to focus my binocular on the floor of the crater below, but my eyes swam with emotion and I couldn’t answer Robin when he said “Well; what do you think of than then Dad?”  It was more awesome than I had ever imagined

Naturally we saw lions and luckily lionesses with cubs; we saw leopards, hosts of gazelles and other herbivores and a bird thought to be the largest and heaviest flying bird, the Kori Bustard, an imperious creature that seemed to be aware of its unique place in avian creation. There are so many aspects of nature in east Africa that it was essential to make another visit and this we did just recently – travelling 6,700 kilometres from South Africa into Namibia and on to Botswana and the Okavango Delta; but more of this next time………………