One aspect of the Covid-19 epidemic relates directly to being housebound for your own protection. Namely, those myriad jobs that have been put off for some time will now coincide with self-isolation. In the past, we might have said we were waiting for a rainy day. Let us all agree it is absolutely pouring, metaphorically speaking!

Being a semi-retired writer on the subject of wildlife and natural history and a photographer and artist in order to illustrate my work, I’ve been drawing and painting, editing photos and catching up on a life story that I’ve had in mind to do for several years.  Writers depend on all sorts of things for inspiration; visual triggers, audible triggers, to set the juices going.  One such trigger came from watching BBC News recently and the announcement that the Excel Centre in East London was to be converted into a hospital for intensive care wards for victims of Covid-19. Named ‘The Nightingale Hospital’, it will be able to provide up to 4000 beds.

This news coincided with some emails I received from Tanzania and it was at the Excel Centre some years ago at a World Travel Market Exhibition that I first met Carel Verhoef, a young man who was just starting out as an organiser of Safaris. Subsequently, we have become firm friends and he has become an expert in the field of African wildlife and Safaris – based in Tanzania. 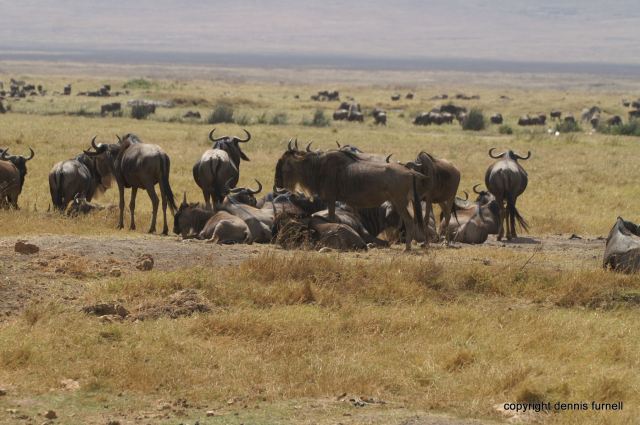 Back then I was compiling and presenting radio programmes and writing articles on ecotourism; a subject I had specialised in for some years. My wife and I had toured around the posh end of the Exhibition at the Excel Centre and took ourselves off to the peripheral stands in the Africa section where I knew some of the representatives.  We stopped at a small display with a collection of outstandingly good photographs of lions with the caption the ‘Lobo Pride’ and the smiling young man on the stand fitted to a tee the classical outdoor, healthy safari specialist. I admired the photos and he began to tell me all about them. How, where and when they were taken. I’m an enthusiast and warm to others of my ilk.

In next to no time we were on first name terms and he was telling me about his concession on the Serengeti at the Lobo Kope (where he based his main campsite) a huge pile of rocks a billion years old and set in tens of thousands of acres of wildlife-rich land. What started out as a general chat of mutual interest was the beginning of a friendship that has grown over the years. He now runs a successful and fascinating safari business and is the father of two lovely girls.

Over the years our face to face meetings have been few, generally at WTM (travel market exhibitions) but we keep in touch regularly. I’ve been to Africa several times, twice with Carel, and I was hoping to plan another trip with him this year to see the Wilderbeest Migration.  However, that will have to be put on a back burner.

The first trip I made was to the Serengeti and Ngoro Ngoro Crater. My wife is not a fan of rough camping in the bush so, with my son Robin, I arranged to meet up with Carel in Arusha in Tanzania to spend some time with him and his Tanzanian business associate ‘Machine’ who was as good with vehicles as his name would suggest.   Carel set about showing us his domain and in next to no time we were seeing leopards and elephants and the Lobo pride of lions and were surrounded by a host of other wildlife.  I’m no slouch when it comes to wildlife. It’s been my life’s work to write about it but, familiar as I am with many larger beasts of the plains, I am out of my depth when it comes

Ensconced in the Serengeti with a couple of comfy ridge tents and camp beds, the fire burning, Carel cooking supper and chatting over the day’s experiences, marvelling at the night sky – what more could you ask for.

Since that first trip, we have travelled thousands of kilometres through Southern Africa, Namibia, Botswana with Carel and his family. Trips that Carel has especially tailored to our needs.

Going back to the beginning of this blog, the e-mails that triggered this were from Carel and his partner Sally Grierson checking up on how we are faring in these difficult times and telling us that they are in the same boat. Well, not quite in the same boat; they are self-isolating in the Serengeti where wildlife is king, and they are thinking of ways in which they might share their fantastic experiences with the rest of us.

I mentioned that Carel and I first became friends when I stopped to chat with him about his superb photographs. He is also a master videographer and with the cooperation and input of two other camera people and a sound engineer has produced a series of programmes of what is happening in the Serengeti – as it happens – Serengeti Live.  There will also be pre-recorded programmes. They are looking for people to partner up with them to get these programmes out to as many people as possible.

The programmes will be ready to stream. If you have a budget for this type of programme, I guarantee it’s just what a locked-down population needs to lift their spirits. All the psychologists are advising us to let nature help us to avoid depression. Even to sit in a comfy seat by the window with, hopefully, some greenery outside is reckoned to be a benefit….. How much more beneficial to watch a specialist at work in the wonderful wildlife-rich Serengeti.

One thought on “Serengeti Show Live”